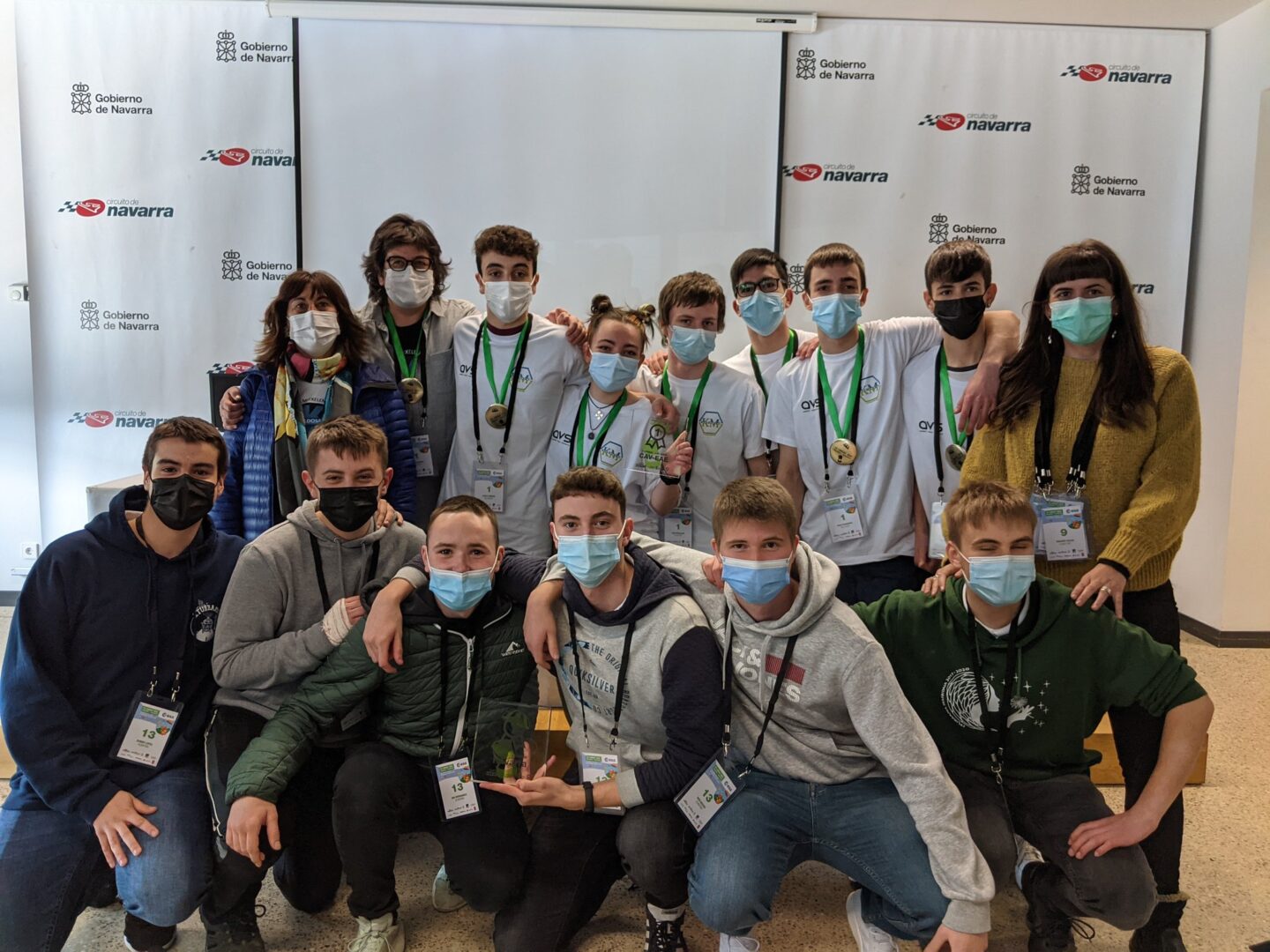 The IV edition of the regional CanSat competition for Navarre took place on the 27 of March in which six teams from Pamplona fought for the first place ticket to Granada.

We took part in the competition with our two separate missions. One with the objective of measuring environmental temperature and pressure and the second one carried out as two  of scientific research: one to determine the satellite’s relative speed through the doppler effect and another to use optic fiber sensors to accurately portray a thermal gradient surpassing discrepancies and inaccuracies presented by standard sensors.

After the launch of the rocket it was time to present our project to a jury, where we managed to give a good impression. Finally came the trophy ceremony and indeed we managed to come in first place and get our pass to Granada.

After celebrating our victory as reward for all our work, we returned home triumphant and with memories to remember.

Through this blog post, we want to tell you that we have designed and created key rings in order to get more money so that we can pay all the expenses of the stay in Granada.

The keyrings are made with the IES Iturrama institute’s 3D printer and designed from Tinkercad (an application that allows editing in 3D). We have decided to make sputniks with our group name because our name Skantnik comes from the first artificial satellite correctly commanded by the USSR in 1957: sputnik 1.

These keychains are available in three colors: yellow, pink and gray and are worth € 1, if you want to buy one we will be this Saturday June 26 at the Tecnociencia 2021 fair in Navarra Arena.

In this blog post, we want to tell you what we have been doing during this last tough straight before CanSat Spain. Despite the fact that this last straight is assuming us long and hard, we have managed to do quite a few tasks.

One of the tasks we have done is to get more sponsors who have contributed money to us in order to pay for the trip, the hotel, the sensors … (more information in the sponsors section). Another task we have done is to design a new PCB and a new more efficient can, correcting and improving the faults of the old can. On the other hand, we have also completed other tasks such as: the new programming (solving the errors of the previous programming, improving it and making it more efficient) and starting the old can (due to different cables being released) and many more things.

Our experience in CanSat Navarra 2021

In this blog entry, we would like to share the expierience we lived in CanSat Navarra. As many of you will know, this competition was celebrated on the sunday of the 28th of March 2021, en the Los Arcos race track, Navarre.

We were all so nervous, gritting our teeth. The 40 min drive to the cuircuit felt like torture. Once arrived at the competition, we saw how relaxed other contestants were wich helped us calm down. That is until we started preparations for the launch. We had an hour left before we let go of the device, and something wasn’t working! We weren’t completely sure, but we concluded that it must have been a loop in the code and a sudden failure from our CO2 sensor. Our only way out was to reopen the prototype and make last minute adjustments, we were fighting against time.

After suffering for what seemed like an eternity, we managed to get it functionaly working again; with only 15 minutes left on the clock! Although it took us longer than expected, we closed the can off and put it through a final test run with the antenna. And after double checking the system it was time to put our device in the rocket. All that we had worked on for the passed 5 months came down to this. We got on to the grounds and prepped up our ground station.

The wait was truly a nail-bitting moment, but all our worries vanished, as we all, simply marveled looked at the data coming through the screen. We had made contact with the Cansat! We couldn’t wait to get to the presentation with proper graphs in our hands.

All teams were prepared and awaiting to see the rocket soar through the air. But the wind decided otherwise. As the engineers had comunicated, a launch with wind speeds above 5m/s wouldn’t be viable and could suppose hazards. So we had to wait past the gast of wind.

We were bored with waiting, when the countdown started and the rocket finally set flight. Our team quickly got the antenna out, managing a succesful data-recieving task. Post-launch we hurried back to our work station and got to createing the graphs. We had no time to waste.

Presentation time had arrived. We were once again incredibly nervous, but luckily, the second rocket fired wile we were exposing, so the presentation was paused and we got a brake. After finishing our presentation and answering the judges cuestions, our job had finished, and it was just a matter of waiting.

They took us out on to the race track to take some group fotos and then they had us waiting in front of the crowd of visitors, awaiting the judges final veredict. All teams where given a medal for participating and a diploma recognising each teams best aspect. Our project was recognised as greates tecnichal feat.

We hadn’t even considered winning, so when we heard the anouncment, we were out of breath. Jumping up and down in pure disbelief. One of the best feelings we’ve ever experienced: the emotion the adrenaline…

We are currently envolved in improving the prototype and our social media sites as much as possible, trying our best to outdo ourselves.